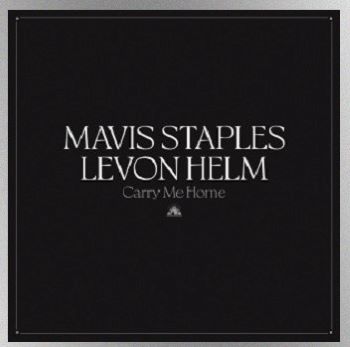 It’s always good to have new music from the incomparable MAVIS STAPLES, so real soul fans will be excited to learn that she’s set to release an album, ‘Carry Me Home,’ on May 20th via Anti Records. However, the music on the 12 tracker isn’t quite “new”. You see in the summer of 2011 Ms Staples was invited by rock legend and sometime member of the Band, LEVON HELM to perform with him at his barn studio in Woodstock. At the venue, Helm regularly put on shows which he called ‘Midnight Rambles’  and he figured that his old friend, Mavis would be a perfect fit for one of the “Rambles”.

Consequently Ms S and her band pitched up at the rustic venue and with Helm on drums  and players from his band they worked their way through a dozen songs. They were all captured on tape and are now being made officially available allowing everybody to enjoy the music of two veteran, caring and consummate performers in full flow.

The repertoire is interesting. The set kicks off with a wonderful version of the Impressions’ ‘This Is My Country’. It’s just a great song and the sentiments are still mightily pertinent. The set is peppered with more iconic cover versions like Nina Simone’s ‘I Wish I Knew How It Would Feel to Be Free’  Bob Dylan’s ‘You Gotta Serve Somebody’ and the Band’s ‘The Weight’ – the only track on which a then-ailing Helm sings. There’s also a version of the Staple Singer’s ‘This May Be The Last Time’ (the source of the Rolling Stones’ ‘The Last Time’, of course) and the gospel standard ‘You Got To Move’ (interestingly, another song recorded by the Stones!)

Neither Staples nor Helm knew that this would be their last performance together—the collection marks one of Helm’s final recordings before his death in 2012. Ms Staples says: “It never crossed my mind that it might be the last time we’d see each other. He was so full of life and so happy that week. He was the same old Levon I’d always known, just a beautiful spirit inside and out.”

At last, though, the wonderful music they made that night will be out there – a wonderful, honest set full of love and joy, tracing the musicians  shared roots and celebrating the enduring power of faith and music.

As a footnote, Ms Staples is set to embark on a European tour. Dates include Edinburgh, London and the Isle Of Wight festival. A simple search will tell you more.