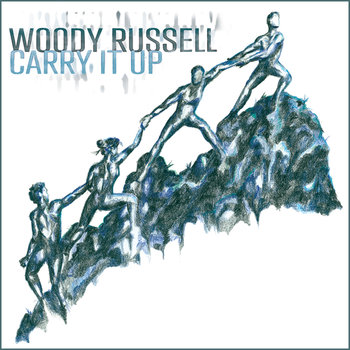 WOODY RUSSELL is a singer/songwriter who works out of Austin, Texas and since his debut (1996’s ‘As Simple As That’) he’s won a coterie of dedicated admirers. Woody’s trio (he plays guitar alongside Lloyd Wright on keys and Jose Ruiz on harmonica) work throughout the USA and Canada in all kinds of different venues simply because it’s impossible to categorise his sound. He says his prime influence is Van Morrison, but listen in and you’ll hear shades of Tony Joe White, Michael McDonald, and Paul Carrack… even the new young pretender Mayer Hawthorne. Yep, there’s a blue-eyed soul undertow to Woody’s work.

Listen to it at its best on his new album, ‘Carry It Up’. The 12 tracker is bristling with blue-eyed soul grooves while lyrically the long player offers insight into relationships as well as addressing broader social issues … as on the album’s title cut. The song ‘Carry It Up’ is a kind of ‘He Ain’t Heavy He’s My Brother’ for the 21st century and its latent quality is enhanced by some haunting harmonica from band member Jose Ruiz. Indeed, throughout the set, Ruiz’s harmonica is a delight.

All the tunes on the album are Russell originals, save for a version of Marvin Gaye’s ‘What’s Going On’. Remarkable given, Woody Russell’s CV, this is the first cover he’s recorded. Easy to hear why. The Gaye anthem fits right into the overall caring message of ‘Carry It Up’ and wisely Woody doesn’t try to replicate the original. Sure, it starts with that classic sax break (courtesy of Dez Desormeaux), but essentially this ‘What’s Going On’ is an acoustic version and Woody’s articulation is slow, precise and deliberate underlining the important message in the music.