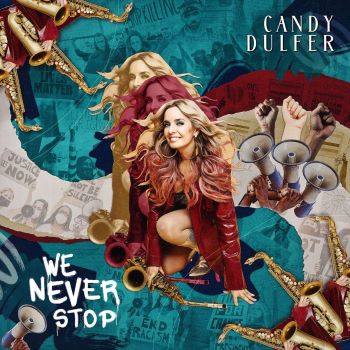 Back in September Dutch sax maestro and Prince  alumina, CANDY DULFER  announced the upcoming release of a new album…. ‘We Never Stop’. The announcement came with the release of an energy packed single, ‘Jammin’ Tonight’  which featured the distinctive sound of a certain Nile Rodgers.

Well, the ‘We Never Stop’ album has just won release and it will delight Candy’s legions of  fans as well as devotees of Nile Rodgers. Mr Chic, you see,  guests on one more track on the set – the closing cut, ‘Convergency’. This one’s a little more restrained than the almost frantic ‘Jammin’ Tonight’   but the restraint doesn’t affect the soulful quality one jot. It’s a good ‘un – but one of many throughout the album, which though credited to Candy, is an ensemble effort with her band playing major roles throughout, especially on the vocals. Indeed ‘We Never Stop’ is more of a vocal album than a sax-led affair. Candy is clearly a team player and delights in allowing her colleagues  take the spotlight.

Amongst those colleagues is Dutch vocalist Ivan Peroti who leads on a number of tracks like the funky opener, ‘Yeah, Yeah, Yeah.’ No surprise that the reference point is a certain Prince. There are more purplish vibes on ‘Say Something’, ‘Raindrops’, ‘The Wall’ (with Marcus Miller on bass!),  ‘No Time For This’ and the sensual slowie ‘The Climb’. The vibe is more Stevie Wonder-ish on ‘We Never Stop’ and ‘Perspective’ while the modern soul brigade will delight in the sweet and lovely ‘Deeper’ and ‘Since I Found You’. On both, the interplay between the vocals and the sax work is a true delight creating two of this year’s top tunes! Indeed the whole album demands investigation by anyone who cares about contemporary/modern soul. Don’t write this off a sax player’s meanderings in smooth jazz. There is plenty of serious soul going down here. Start with the totally lovely, ‘Deeper’ and take it from there. You’ll never stop!

CANDY DULFER : We Never Stop’ out now via The Funk Garage/Mascot Label Group.