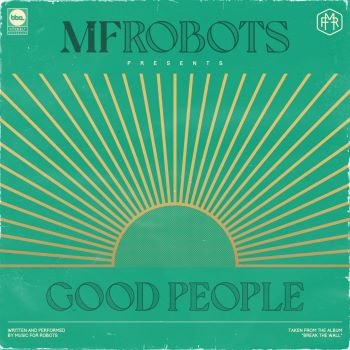 Last autumn MF ROBOTS (the pairing of ex Brand New Heavies Jan Kincaid and Dawn Joseph) announced, nice and early, that they were releasing a new album (‘Break The Wall’) this year, 2021. They issued a taster single – the Latin-tinged Happy Song’ which was followed by classy remixes from Kenny Dope, Kaidi Tatham and Daz-I-Kue. That was followed by another single – a cut that, I guess, is to be their sort of signature tune… ‘Mother Funkin’ Robots’.

The MF’s latest single is ‘Good People’ which is set to be released in a plethora of remixes courtesy of London production duo MontaQue Adamson . The pair have both played with MF Robots since their first gigs and they helped write the band’s upcoming album ‘Break The Wall’. Both Alex Montaque (keys) and Naz Adamson (bass) have been staples in the UK music scene for the past 15 years, working with world-renowned artists both on stage and in the studio. Their remix of ‘Good People’ takes the laid-back original and offers a funky-house interpretation. There are also the usual edits, dubs and instrumentals.

There are in fact seven edits of that  tune on an EP to be released in May. The mini album is actually a ten tracker – the three remaining cuts are Jan Kincaid’s ‘Bossy Nova Refits’ of ‘Mother Funkin’ Robots’. Obvious, yes, but Mr K gives the original a Latino flavoured makeover.

MF ROBOTS…. Good People/ Mother Funkin’ Robots remixes will be released on May 14th as a digital EP via bbe Records.