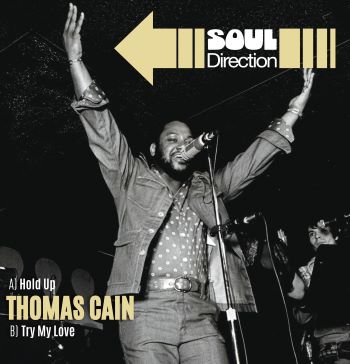 The latest 7” from SOUL DIRECTION features two super cuts from Southern soul man THOMAS CAIN. Born in Athens, Alabama in 1946 Cain recorded sporadically and anoraks probably know him better as a writer – he penned plenty of tunes, most notably in tandem with Arthur Alexander.

Musically young Thomas was reared on store front, church music becoming proficient on church organ, trumpet and piano. In the mid-60s he attended Alabama A&M University in Normal, Alabama where he majored in music and in his spare time, he played in bands locally. One band member, a certain  Fred Wesley suggested that Cain needed to leave Alabama to make progress, so, in autumn 1966, he left Alabama and enrolled in Tennessee State University in Nashville.

There and now specialising in  trumpet, he joined Thomas Tyrone Smith’s “Soul Revue” and amongst those they played with were Arthur Conley and Rufus Thomas. In 1970 he teamed up with Arthur Alexander and began seriously writing songs  – many of which appeared on Arthur’s 1972 Muscle Shoals album.

In the mid-70s, our man met up with Dennis Linde of the Combine Music Corp. Linde had written Elvis’ ‘Burning Love’ and, encouraged, Cain signed up with him as a solo artist. The result was one RCA single…. ‘Dragging It Out’ and ‘Crawling’. It meant little but around the same time Cain cut two more songs – ‘Hold Up’ & ‘Try My Love’ and it’s those two cuts  that make up the new Soul Direction 45.

Interestingly both songs were co- written with Michael Bacon who is the brother of Hollywood movie star Kevin Bacon and both are quality productions and beg the question as to why they were never released. ‘Hold Up’ is bright and breezy with a full on production while the equally excellent ‘Try My Love’ is a just a touch slower but still jaunty. Cain has  a wonderful old school voice – a little like Tyone Davis and/or John Edwards. Why he didn’t record more is a mystery! My guess is that Cain didn’t fancy it – preferring to take his career in a different direction. In 1980, he  formed Sweet Baby Music, a co-publishing venture with Combine Music Corp. The company went on to have several #1 Country hits and in 1984, Frances Preston the president of BMI hired Cain where he became a Senior Director of writer publisher relations by the 1990’s. Cain retired from BMI June 30, 2012. Right now , we’re told, he’s completing his first fiction book and working on a story about how playing his grandmother’s broken down, church  organ got him a  career in the music business.