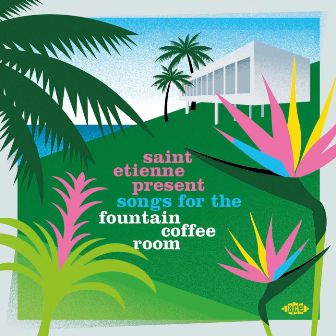 The freshest compilation from Ace Records is as intriguing as it is interesting. The 20 tracker has been put together by the St Etienne crew (Sarah Cracknell, Pete Wiggs and the ubiquitous Bob Stanley) and here’s the concept: they say the music they’ve selected and sequenced is the sort of music that could/might/would have been played in a cool, trendy LA bar/coffee shop in the mid 70s… “the sort of place where Warren Beatty and Julie Christie might meet in the afternoon for a secret rendezvous…” Know the place well, there’s one just like it round the corner from us, though Warren’s not been in much lately!

Whatever, it’s the music that really matters and here on ‘ST ETIENNE PRESENT SONGS FOR THE FOUNTAIN COFFEE ROOM’ the soundtrack is a sweet and lovely mix of sophisticated soul, what’s now called “yacht rock” (Ahoy there Warren!), blue-eyed soul and singer/songwriter flights of fancy.

The soul contingent is led by Marvin Gaye with his lazy sounding but insightful ‘Where Are We Going’. Then there’s Mille Jackson’s ‘House For Sale’, Tamiko Jones’ ‘Touch Me Baby’, Bloodstone’s still gorgeous ‘Natural High’ and John Edwards’ cover of America’s ‘Tin Man’ and that little run down (especially that last track) indicates the overall flavour of the whole collection…. laid back, cool, easy on the ear with just an edge to avoid banality.

Other highlights include Stephen Bishop’s ‘Save It For A Rainy Day’, Utopia’s original of ‘Love Is The Answer’ , Hall & Oates’ ‘Lilly’, Boz Scaggs’ ‘Hollywood’ and the original ‘A Love Of Your Own’ from Ned Doheny… splendid stuff to chill with in your favourite neighbourhood cafe… now was that a skinny latté or a flat white, Warren?