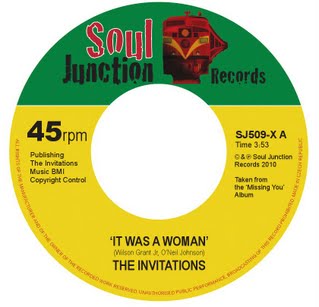 To soul collectors, vocal group The INVITATIONS means two big tunes – ‘What’s Wrong With Me Baby’ and ‘Skiing In The Snow’. Both appeared on the Dynovoice label though the boys also recorded for MGM where their ‘Watch Out Little Girl’ became an in-demand item. In the 70s the band recorded for Diamond, Silver Blue, Red Greg and they also became regular visitors to the UK where they often toured as “THE AMERICAN DRIFTERS”. In 2009 the veteran outfit formed their own Invite Records on which they issued an album ‘Missing You’.

The UK’s resourceful SOUL JUNCTION label has taken two of that album’s cuts to release a new 7″ vinyl single. The tunes in question are ‘It Was A Woman’ and ‘Heavenly Love’. The former is a real old school harmony effort with a lyric preaching respect for women; the latter is a sparser affair – almost a slowie, it boasts a lovely, catchy chorus. Good to know that real soul is still being produced.

You can find out more about the release – and indeed all the SOUL JUNCTION catalogue – on the label’s new web site www.souljunctionrecords.co.uk  … It’s just been launched and is well worth checking out.