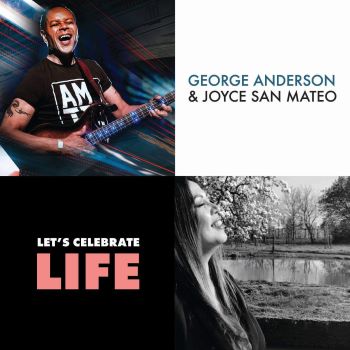 GEORGE ANDERSON is the bass player with smooth jazz veterans Shakatak but in band down time he also pursues his own solo ambitions in his own name (or sometimes as The George Anderson Band). He’s released a number of albums with his versions of  George Duke’s ‘Brazilian Love Affair’ and Luther Vandross’ ‘Never Too Much’ being favourites while his ‘Back In The Day’ from his ‘Expressions’ long player became a modern soul favourite.

George’s latest offering is a jazzy, funky, soulful workout of a single… ‘Let’s Celebrate Life’. It’s a collaboration with vocalist Joyce San Mateo – a regular collaborator with Tom Browne; so no surprise that this ‘Let’s Celebrate Life’ has  a feel of ‘Funkin’ For Jamaica’… tough vocals, rock steady bass (naturally) and some wild horn playing… what’s not to like?

We believe that ‘Let’s Celebrate Life’ is the first track from an upcoming George Anderson album project – but no solid news yet.