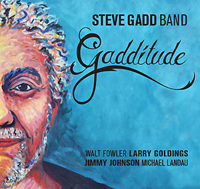 Time was when STEVE GADD was THE session drummer of choice right across the US music scene. Setting new standards in drumming, he’s played with anyone who was anybody. More recently, though, he’s been keeping a deliberate low profile… touring with James Taylor and recording his own albums and his fourth set, ‘Gadditude’, has just won European release.

The 9 tracker features Gadd’s regular team – Walt Fowler, Larry Golding, Jimmy Johnson and Michael Landau and though Gadd’s the leader don’t expect too many big drum solos or fancy fills. The set’s a team effort which exudes the fun obvious when a team of friends make the music they love. Most of the LP’s tunes are originals but listen up to an ambitious cover of Keith Jarrett’s ‘Country’ and a soulful reading of Abdullah Ibrahim’s ‘The Mountain’.

‘GADDITUDE’ by the STEVE GADD BAND is out now on BFM Jazz.