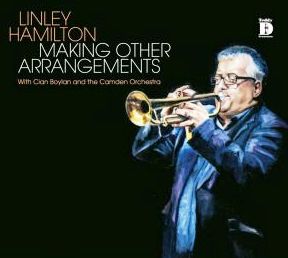 LINLEY HAMILTON is an Irish jazz trumpeter … a mainstay of that country’s music scene for something like 30 years playing with people like Van Morrison and Paul Brady. Over the past ten years Linley’s focused on getting back to his jazz roots and in 2009 he graduated from DIT Dublin with a 1st Class Masters in Jazz Performance and the celebrated Student Academic Medal. Since then he has completed his PhD in Jazz Performance at Ulster University Magee, and is now known as “Dr Jazz!” on his radio show which has just entered its tenth year. Its broadcast on Friday nights at 10pm on BBC Radio Ulster.

“Dr” Hamilton has just released a brand new album – ‘Making Other Arrangements’. The 10 tracker features Linley as soloist with his own 21-piece band – full rhythm section, woodwind and a 12-piece String section.

The repertoire consists of nine covers and one original – the breezy ‘Carmel; which was co-written by the album’s arranger Cian Boylan. Amongst the covers is an evocative version of James Taylor’s ‘Don’t Let Me Be Lonely Tonight’ and a string-drenched, innovative reading of EWF’s ‘After The Love Has Gone’. Amongst the chosen jazz classics are treatments of Artie Butler’s ‘Here’s To Life’ and Freddie Hubbard’s ‘Brigitte’. The LP boasts one vocal…. ‘Louisiana Sunday Afternoon’ which features American vocalist Dana Masters who now lives in Northern Ireland; she’s a regular Linley Hamilton collaborator.