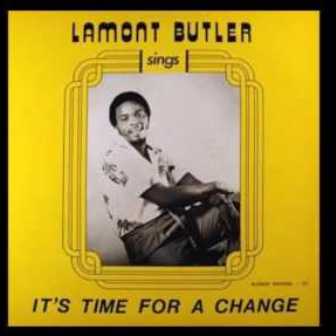 My guess is that only the deepest soul collector will know the name of LAMONT BUTLER. Born just over 70 years ago he has just one album to his name, ‘It’s Time For A Change’ and over the years (you’ve guessed!), it’s become highly collectable!

Lamont (still alive, by the way) was born and raised in Louisville, Kentucky by a god-fearing family headed by locally-renowned gospel, blues and R&B singer and pianist Clifford Butler. As he grew older Lamont toured with his father and eventually broke out on his own as well as working with groups like The Enterprise, The Dynamics and The New Beginnings. He started writing his own songs and, using his dad’s old 4 track recorder, he started to put them on tape – eventually having enough for an album – the aforementioned  ‘It’s Time For A Change’. Lamont peddled it at his gigs (secular and in the local churches) and he tells us it was “big in and around Louisville”!

After the death of his father, Lamont lost his passion for music and drifted away from the business and was unaware of the interest in his album, which Acid Jazz imprint, Miles Away, are all set to reissue in April (with his full co-operation). The set is a gospel 8 tracker and highlights include ‘Come Into God’s World’ and the rousing ‘Get Up And Praise The Lord’. The sound throughout is rough and ready… homespun even, but none the worse for that! Gilles Peterson and Craig Charles are already playing tracks on their shows and receiving plenty of positive feedback.