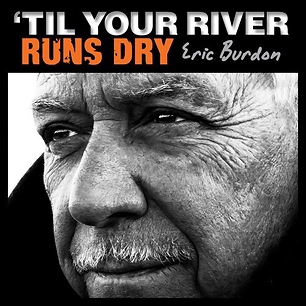 Soul fans with long memories will know all about ERIC BURDON. The gravel-voiced Geordie was lead vocalist in seminal 60s British R&B band THE ANIMALS whose repertoire was stuffed with classic soul and blues numbers. He quit the band when they were riding high and decamped to the States where he helped form WAR before moving onto a solo career which has been a series of highs and lows.

Now the man who Rolling Stone magazine hailed as one of the “100 Greatest Singers Of all Time” is set to release a brand new album – ‘Til Your River Runs Dry’. The 12 tracker has been chiefly written by ERIC and he co-produced it with TONY BRAUNAGEL. It was recorded in Santa Barbara and New Orleans – a place which ERIC freely admits brings him closest to his musical roots.

He revisits those roots on one of the album’s key cuts – ‘Bo Diddley Special’. It’s a semi-autobiographical piece that echoes the very first track on the very first ANIMALS LP. That song was the rumbling ‘Story Of Bo Diddley’ … what goes around comes around.

Other goodies include the searing blues of ‘Before You Accuse Me’ (another nod to his roots), the tango that is ‘Wait’ and the intriguing ‘Invitation To The Whitehouse’.

ERIC BURDON’S ‘TIL YOUR RIVER RUNS DRY’ is released on ABKCO/Universal Records on March 4th.