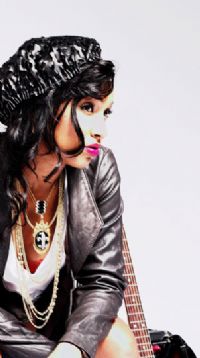 It seems that retro soul just won’t go away. The latest artist to plough the groove is newcomer MELANIE FIONA. MELANIE, protégé of KANYE WEST, releases her debut album ‘The Bridge’ at the end of July and it’s stuffed with big, beefy retro soul sounds. The lady herself, though, doesn’t want to be pigeon-holed. She says she’s a singer/songwriter whose music “reveals a sweet push-and-pull between countless elements of herself”, adding that “it crosses the barriers between ethnicities, genres, age groups and genders. It can’t be defined as just one thing”. A quick listen to the sampler, though, reveals a huge retro soul feel… most obvious on the brash ‘Please Don’t Go (Cry Baby)’ which samples MARTHA AND THE VANDELLAS’ ‘Jimmy Mack’ to absolute death. The guitar on ‘Ay Yo’ echoes the sound of the STAPLE SINGERS, while ‘Bang Bang’ is clearly a conscious effort to recreate the retro sound perfected by AMY W and DUFFY. The album’s lead single is ‘Give It To Me Right’ which is solidly built on the chassis of the ZOMBIES’ ‘Time Of The Season’. Like the rest of the album, it’s immediately infectious and you can catch a full review on www.soulandjazzandfunk.com very soon.