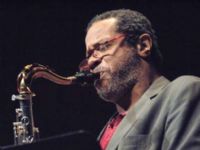 Not everything flowed as smooth as the Budvar beer at the 14th Cheltenham Jazz Festival – there were a lot of disgruntled punters on Saturday afternoon (May 2nd) as a power failure shut down the Everyman Theatre for several hours and caused chaos to the performance schedule. Fortunately, there were only two cancelations, albeit significant ones: the much-anticipated mid-afternoon performance by the Nikki Yeoh Trio featuring John Surman followed by an early evening one due to be given by ex-Miles Davis saxophonist Dave Liebman in tandem with the BBC Big Band. The power was restored in time for Madeleine Peyroux’s 9.30pm show at the Everyman, which went down well with an appreciative audience that heard the Bohemian American singer/songwriter/guitarist focus on songs from her new album, ‘Bare Bones.’

There were plenty of other highlights at a festival that has become renowned not only for the quality of the acts it presents but also the variety of the music it features. A case in point was Don Byron’s New Gospel Quintet – their late night performance wasn’t a sell-out but quickly became one of the talking points of the festival. Despite Byron’s jazz associations – he’s a clarinet virtuoso who also plays some tidy saxophone – his group lovingly paid homage to the music of Thomas A. Dorsey, a songwriter and pianist who was the founding father of modern gospel music. Thanks to the captivating presence and soulful vocals of female singer, DK Dyson – who was dressed like some kind of Nubian high priestess – the concert transcended all expectations. Admittedly, the jazz content was minimal, but that didn’t matter – the music, comprising a raft of vintage Dorsey-penned gospel classics, was incredibly uplifting. In fact, you could be forgiven for thinking you were in church rather than a Victorian theatre.

Earlier the same evening there had been another stupendous concert – that time it was jazz, pure and unadulterated. The brilliant New York trumpeter, Dave Douglas, and his quintet delivered a masterclass in post-bop improvisation. Accompanying Douglas was tenor saxophonist Donny McCaslin, pianist Orren Evans (who played Fender Rhodes), bassist Scott Colley and drummer extraordinaire, Clarence Penn. Among the highlights was a new number ‘Campaign Trail’ – inspired by the recent US Presidential election – and a delightful encore piece, ‘Little Pep.’

An hour or so prior to the Dave Douglas group, the Everyman Theatre had witnessed a long – some might say interminable – performance by legendary drummer Jack DeJohnette and the Jerwood All Stars, an octet comprised of some of the brightest new names in British jazz. Among them was pianist Tom Cawley and trumpeter Tom Arthurs – even so, the concert disappointed, mainly due to the dubious quality of the original, specially-composed material. DeJohnette’s self-penned opener, ‘Zoot Suite,’ was all right in places but had moments of great tedium and pretentiousness – the worst piece, though, was a cacophonous piece of free jazz by clarinettist, Shabaka Hutchings, who used hand signals to direct the band. There was also a homage to avant-garde jazz man, Eric Dolphy – that, too, really tested the listener’s powers of patience and endurance. It was a relief when the concert ended.

Far better was an exciting set at the Town Hall Pillar Room by young British pianist Robert Mitchell and his 3rio (no, that’s not a typo) – among the highlights was a scintillating jazz version of Massive Attack’s ‘Teardrop’ dominated by Mitchell’s crystalline piano.

Not quite as good, but engaging nevertheless, was the hour-long gig by the critically-lauded Portico Quartet in the same venue a day later. They created some intriguing sonic textures, thanks mainly to Duncan Bellamy’s haunting use of the hang, a tuned percussion instrument that sounded like a cross between steel drums and gamelan bells. They played the title track from their Mercury Music Prize-nominated album, ‘Knee-Deep In The North Sea,’ but mostly showcased new material – like the Hispanic-flavoured ‘The Dawn Patrol,’ ‘The Clipper,’ and ‘The Visitor.’

More orthodox jazz came in the shape of Lea Delaria, though the former stand-up comic and actress can hardly be described as conventional. She was in incendiary form, though sadly, the poor, echo-laden acoustics of the venue (a restaurant called The Daffodil, which boasted a ceiling as high as an aircraft hangar’s) detracted from the singer’s performance. Cracking jokes in between songs and exchanging witty banter with the audience, Delaria mostly featured material from her recent live album though did include a jazzed-up version of ‘What’s New Pussycat,’ a probable taster from her next studio album. Singer Ian Shaw joined Delaria for the encore, a crazed version of an old bebop number dominated by manic scatting from both vocalists.

The festival climaxed spectacularly on Monday 4th May at Cheltenham’s Town Hall thanks to the jaw-dropping pyrotechnics of virtuoso violinist Nigel Kennedy and his Polish jazz quintet. Performing on a custom-built, body-less electric violin and using an array of effects pedals, Kennedy and his band delivered a freewheeling fusion of sounds that blended jazz with Brazilian-tinged bossa nova grooves, psychedelic rock, folk and world music. There were times when the music lacked subtlety – especially in the second half of the show, when a less-interesting rock-feel prevailed thanks to the hi-decibel power-drumming of Pawel Dobrowolski – but there were moments of breathtaking beauty, too, to counter this, especially when Kennedy played in a highly expressive lyrical vein, as on the extended ‘Father And Son,’ which took its inspiration from a 15th century French melody. As an encore, for once Kennedy’s quintet delved into bona fide jazz territory, turning in a decent performance of Duke Pearson’s ‘Big Bertha.’