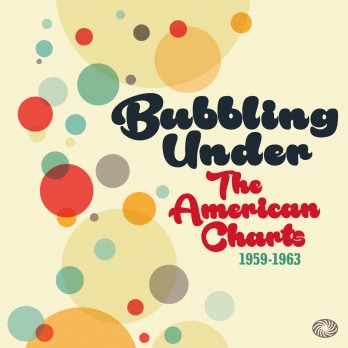 American musicologists love charts and statistics. Glance at any US music biz paper and you’ll find a plethora of charts…. none more interesting, maybe, than the Bubbling Under countdown – essentially a chart for records that don’t make the charts!

The first Bubbling Under chart was published in Billboard in 1959 and it listed 15 songs that hadn’t quite made it into the “proper” Hot 100 listing. Since then it’s become a regular feature, giving exposure to discs that otherwise would be denied any.

Archive label, Fantastic Voyage has just released a fascinating 3CD, 90 track snapshot of the US Bubbling Under charts between the years 1959 and 1963.

It pulls together some mighty interesting music from the Golden Age of pop and as you can imagine there’s plenty of embryonic soul. Featured soul artists include Robert Parker, Arthur Alexander, Sam Cooke, Ike and Tina Turner, The Flamingos, Barbara George, Baby Washington, Aaron Neville, Ray Charles and Nolan Strong. There’s also a couple of Motown outings – The Temptations’ ‘Paradise’ and Stevie Wonder’s ‘I Call It Pretty Music But The Old People Call It The Blues, part 1’.

Of course, there are lashings of great American pop as well – plenty from big names …. Neil Sedaka, Bobby Vee, Johnny Cash, Duane Eddy, The Crickets, Del Shannon and the 4 Seasons. And because of the nature of the Bubbling Under chart you get lots from artists who were never even “one-hit-wonders”. Anyone remember the Kenjolairs, the Dutones, Sue Raney, Joe London, Vicki Tasco or the wonderfully named Jack B Nimble and the Quicks?

The album’s never less than fascinating with almost each track offering up a point of interest, a talking point or a tasty bit of trivia For instance you can sample the sanitised Vicki Carr version of the Crystal’s ‘He’s a Rebel’… there’s a US cover of a UK original – Jan Burgen’s take on Kenny Ball’s ‘Midnight In Moscow’… and so much more.