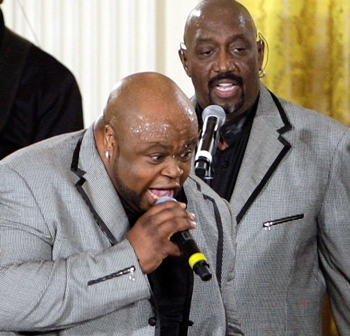 Bruce Williamson, one time member of the Temptations, died on Sunday 6th September in Las Vegas. He was aged 49 and died from Covid 19 after having gall bladder surgery in August.

Williamson was born in Los Angeles in 1970 and started his singing career in the church before working the Las Vegas bars and clubs both a s solo singer and member of Blackberry Jam. Mentored by Ron Tyson, Bruce replaced G C Cameron in the Tempts and featured on the albums ‘Back To Front’ and ‘Still Here’. He left the group in 2015. He said it was to pursue a gospel career; others say it was because of his weight issues. He was replaced by former Tower of Power singer Larry Braggs (who coincidentally has his own solo single out now – see our news archive)

We believe that recently Williamson was working again with the Blackberry Jam group and also working on gospel material.  He’s pictured above with Tempts’ founder Otis Williams.