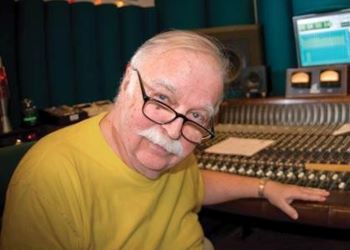 Recognized as a premier league music studio engineer, BRUCE SWEDIEN has died aged 86. He worked across genres but is probably best known for his  work with Quincy Jones and Michael Jackson on ‘Thriller’ and ‘Bad’. His daughter Roberta Swedien posted that her father died on Monday 16th November: “My dad, Bruce Swedien, passed away peacefully last night, November 16th. He was 86. A legend in the music industry for over 65 years and 5-time Grammy winner. He had a long life full of love, great music, big boats and beautiful marriage. We will celebrate that life. He was loved by everyone. Rest in peace dear sweet Daddy-ji. We will love you forever.”

Swedien was born in 1934 in Minneapolis of Swedish parentage who encouraged their son’s music career.  In his early 20s Swedien was working for RCA and helping record artists like Count Basie and Duke Ellington. By the mid-60s he was working with the Four Seasons on all their big hits. In the late 60s, Bruce worked as a freelance and his most notable work at this time was with Brunswick/Dakar where he engineered for artists like The Chi-lItes, Jackie Wilson and Barbara Acklin.

In the mid-70s he moved to Los Angeles where he met Michael Jackson on the set of ‘The Wiz’. Swedien had known Quincy Jones since his early days in the busines, so when Jones began to record Jackson, Swedien was the logical choice as engineer. Jones has posted: ”There are not enough words to express how much Bruce meant to me. I’m going to miss your presence every single day “Svensk”, but I will cherish every moment we shared together laughin’, lovin’, livin’, & givin’… Rest In Peace my brother.”

Acoustic geeks will tell you that Bruce Swedien pioneered the recoding technique that became known as “The Acusonic Recording Process”. Essentially, it allowed the engineer to synchronise multiple 24-track tape machines, enabling him to record an almost limitless number of vocal and instrumental takes. The geeks will add that that and other small Swedien tweaks (like cutting out low frequency drum sounds) gave the Jackson albums their unique sound.