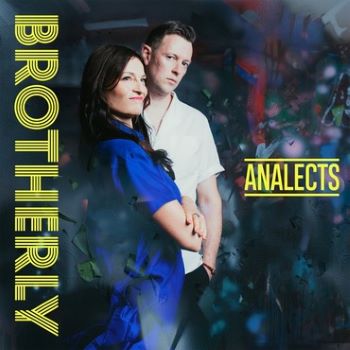 Underground dance aficionados will be familiar with BROTHERLY – a Brit duo, Anna Stubbs and Rob Mullarkey. Formed amidst the London club scene of the mid 2000s, they declared their mission statement to be to bridge the gap between jazz and experimental dance. With underground hits like ‘Put It Out’ and their albums ‘One Sweet Life’ and ‘Find First Light’ their fans would confirm that that’s exactly what Stubbs and Mullarkey have done!

If you’re not aware of the band and/or have adventurous ears, you can catch them at their best on their just released ‘Analects’ long player – essentially a collection of their best past outings. Three of the tunes, though, have been reworked, they are ‘World In A World’ with new input from piano maestro Jason Rebello, ‘Raindown’ with new keyboard parts from Kaidi Tatham and ‘DTs’ on which Donny McCaslin adds new sax parts. For long-time fans there is one brand new recording – ‘The Code’ which features Stubbs’ striking vocals against a percussive backdrop.

BROTHERLY: ‘Analects’ is out now on Whirlwind Recordings.