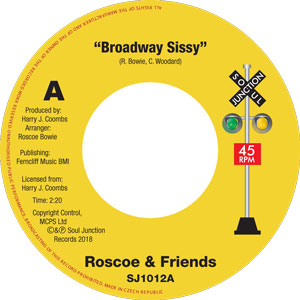 One side of the platter features ROSCOE and FRIENDS with ‘Broadway Sissy’…. a fast, building beater with a tough vocal. In the manner of Dyke and the Blazers, the cut takes no prisoners … little wonder it’s been a long time Northern soul favourite. Research reveals that Roscoe is Roscoe Bowie Jr – a Washington-based jazz and session horn player and his ‘Broadway Sissy’ came about by accident (much like Booker T’s ‘Green Onions’). The story is that Roscoe was working in his brother’s basement studio on a session for the Versatiles. When they didn’t’ show, the band began jamming and ‘Broadway Sissy’ was the welcome outcome. Picked up by record man Harry Coombs, it was released on the Tec label, eventually becoming a big Northern tune!

And there’s the link with this Soul Junction single’s other side – TOJO’S ‘Broken Hearted Lover’. We’ve just mentioned the no-show Versatiles…. their lead singer was the sweet-voiced Robert Barnes – known to his friends as “Tojo” and Harry Coombs always felt he had major potential as a solo artist. Thus he had “Tojo” record the up-tempo ‘Broken Hearted Lover’ … much smoother than ‘Broadway Sissy’ and with a considerable charm; it sadly meant little, till it was picked up by the Northern crew.

If all that sounds complicated, the music will reassure you. Uncomplicated, straight-forward soul… another coup for Soul Junction!