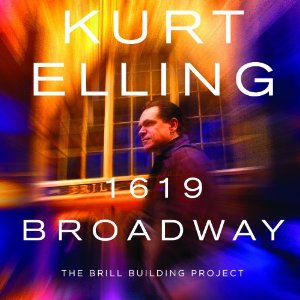 Innovative, Grammy-winning jazz vocalist, KURT ELLING is due to release his latest long player at the beginning of October. ‘1619 Broadway –The Brill Building Project’ is ELLING’s unashamed tribute to the wonderful song smiths who worked in the iconic New York building in the 50s and 60s.

The Brill Building – situated at 1619 Broadway – was a honeycomb of offices that for all kinds of different reasons became home to over 150 tenants associated with the pop music industry – record labels, studios, publicists and, most importantly, song publishers and their writing teams. ELLING – who now lives in Manhattan – acknowledges that most jazz singers (and indeed their fans) usually concentrate on material from the likes of the GERSHWINS, RODGERS and HART etc … the so-called “Great American Songbook”. Keen to move jazz vocals forward , ELLING has decided to create a new volume of that “Songbook” by concentrating on a set of songs associated with the Brill Building.

ELLING’S made an eclectic choice of songs ranging from the obvious (LEIBER and STOLLER’S ‘On Broadway’, for instance) to the off-the-wall (the same team’s ‘Shoppin’ For Clothes’ recorded by THE COASTERS). Classics include BURT BACHARACH’S ‘A House Is Not A Home’ and CAROLE KING’S ‘Pleasant Valley Sunday’ and there’s a number of selections that weren’t actually written at Brill, but have that special sound and writing link – like CAROLE KING’S ‘So Far Away’ and PAUL SIMON’S ‘American Tune’. All are presented in ELLING’S unique, innovative way. Working with long-time collaborator, LAURENCE HOBGOOD, the songs are reconstructed with subtle reharmonizations, unexpected rhythms and a new jazz sensibility… a delight for both jazz fans and pop collectors.