BRITS AT THE BRILL…. 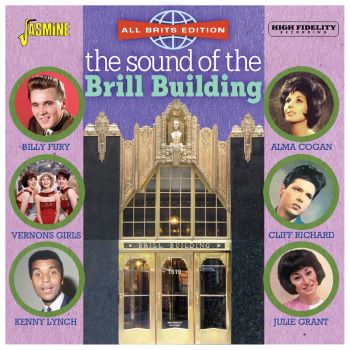 Budget reissue label, JASMINE have just released a third volume in their compilation series  that looks at the music that came out of New York’s famed Brill Building in the early 60s. The first volume chronicled songs recorded by female singers and groups, while volume 2 offered a US male perspective. The third volume is a Brits edition… 34 Brill-sourced songs recorded by British acts – male, female and groups.

In the 50s and 60s cover versions were the bread and butter of British pop music. The UK, of course, had its own burgeoning pop business. It’s epicentre was “Tin Pan Alley” – London’s Denmark Street and, there, plenty of jobbing song writers and publishers churned out tunes for a growing number of pop  wannabbes. But those wannabbes, their managers and agents knew deep down that American sourced songs were the real deal. Consequently they scoured American new releases to cover and  hopefully hit pay dirt before the US version was released over here! And what better place to search for material  than the legendary Brill Building – home to writers like Carole King, Gerry Goffin , Jerry Leiber, Mike Stoller, Doc Pomus, Mort Shuman, Burt Bacharach, Hal David and Neil Sedaka – all guaranteed hit makers!

So THE SOUND OF THE BRILL BUILDING – BRITS EDITION offers 34 Brit takes on classic Brill songs. So here you can enjoy things like Jackie Lee’s version of ‘Will You Still Love Me Tomorrow’, Julie Grant’s take on ‘Up On the Roof’, Craig Douglas’ ‘When My Little Girl Is Smiling’ and a lot more. The album is a real mixed bag of sounds… classic pop, novelty songs, dance items and a smattering of oddities – like “bad boy” actor Oliver Reed’s  version of Ben E King’s ‘Ecstasy’, which, like most the material, we’ll file under “interesting”. “Interesting” or not, THE SOUND OF THE BRILL BUILDING – BRITS EDITION is a wonderful snapshot of Brit pop before four lads from a Northern sea port came, saw and conquered! (Remember though that the Fabs themselves were keen on the odd cover version!)