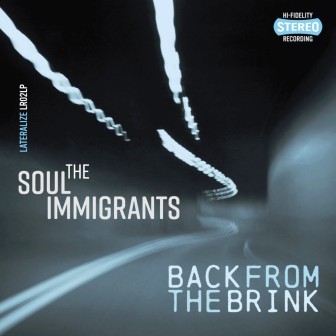 South London’s THE SOUL IMMIGRANTS (marshalled by guitarist/vocalist Emrys Baird) are putting the finishing touches to their latest album ‘Back From The Brink’ coming out Nov 15th on Lateralize records.

The LP was flagged up last month with the release of the single ‘I’m a Good Woman’. The cover of the Barbara Lynn classic was fronted by guest vocalist Ria Currie and most commentators commented that between them the Immigrants and Ms C conjured up a real old school, raw 60s soul sound à la Koko Taylor and Sugar Pie Desanto.

Oddly that’s not the album’s signature sound. Most of the rest of the concise 8 tracker is more laid back and, fronted by Baird’s vocals, reminded me a lot of the James Hunter sound … not a bad thing in my book!

The comparison is most obvious on the title track while the shuffling ‘Up Close And Personal’ offers a similar flavour. Elsewhere, ‘The Devil May Have…’ dips its sonic colours into the Caribbean palette. Input there too from Freddie Notes. ‘Sooner Or Later’ is the LP’s nod to the blues and southern soul while on the oddly titled ‘The Plains Of Maker Height’s the band develop the Southern soul feel a little more. The pacey ‘Sweet Rest’ offers more variety to an album that shows the Soul Immigrants know and respect soul’s wonderful heritage.