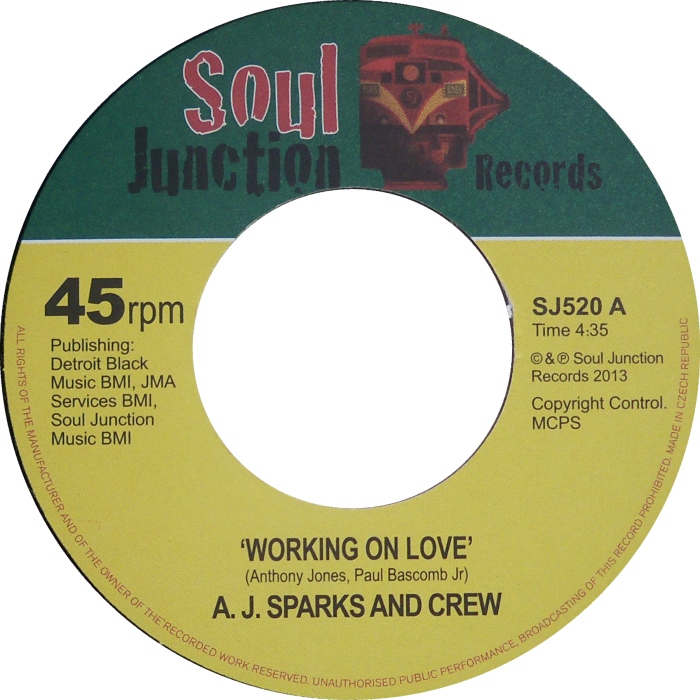 Soul Junction Records kick off 2013 in fine style with a 7″ single on A J SPARKS and CREW. Yes – an unknown name, but collectors of Detroit music will know A J as on of that city’s most respected session drummers.

A J’s real name is ANTHONY JONES, but while playing drums for EDWIN STARR at the Harlem Apollo, the house MD said that he “could sure beat the sparks outta that drum kit”… so A J SPARKS was born! Apart from playing in STARR’S band, A J has played with THE DETROIT EMERALDS, THE FLOATERS, CHAPTER 8, MICHAEL HENDERSON, GEORGE CLINTON and RONNIE McNEIR.

He now runs his now Detroit Black Smoke Production company and its from that source that Soul Junction have licensed the two cuts that make up their new release. The songs in question are the sultry and soulful ‘Working On Love’ (laid back n lovely) and the funky and loose ‘Gotta Make it Do What it Do’ (featuring GEORGE CLINTON on vocals). The single is available in good old fashioned vinyl and you can find out more @ www.souljunctionrecords.co.uk