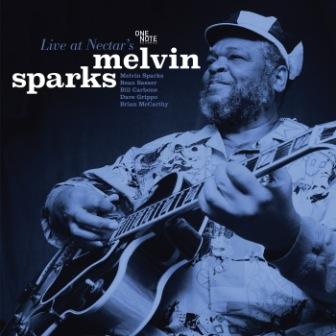 MELVIN SPARKS (who died in 2011) was a stellar soul-jazz guitarist who’d played with the great and the good of the soul and jazz worlds. He began his career on the road backing people like Jackie Wilson, Curtis Mayfield and Marvin Gaye but after working with George Benson he decided to strike out on his own as a jazz player… more specifically it was soul-jazz that won Melvin over.

One Note Records have just released Melvin Sparks’ very last album… a live set that was recorded at the Nectar Club in Burlington, Vermont in December 2010. Supported by Beau Sasser on organ, drummer Bill Carbone and saxophonists Dave Grippo and Brian McCarthy, the 6 tracker is a concise reminder of how musically satisfying soulful soul jazz can be.

Album highlights are covers of Bobby Womack’s ‘Breezin” and The Four Tops’ ‘Ain’t No Woman’. This ‘Breezin” is very different to the familiar George Benson take. Running in at over nine minutes, Sparks effortlessly brings in countless other tunes – notably ‘Secret Love’ and ‘Surrey With The Fringe On Top’. ‘Ain’t No Woman’, a lovely tune to start with, was first recorded by Sparks in 1973 and he’s rarely played it since. Here he pours his soul into proceedings while the Grippo Horns add plenty of light and shade.

The whole album, ‘Melvin Sparks Live At Nectars’ is a glorious homage to the golden days of soul-jazz… even the art work, typography and label name and logo echo the best of Blue Note!