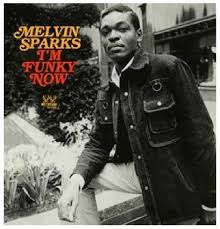 MELVIN SPARKS was a soul-jazz guitarist who enjoyed a renaissance after being discovered by the Acid-Jazz crew in the 90s. He was a prolific session player and recorded in own right on labels like Prestige, Eastbound and Westbound.

Most of Sparks’ recordings are fairly easily accessible and now Ace/BGP has made available a rather rare and in-demand Sparks album…. the 1975 recorded ‘I’m Funky Now’. The 7 tracker was never officially released by Westbound. It’s thought, oddly, that the label suits disliked it because it was more of an ensemble piece than a Sparks solo set. Whatever, the LP is an easy on the ear, brash and funky set. Don’t expect anything too cerebral – you know, I guess, what to expect with titles like ‘Disco Booty’ and ‘I’m Gonna Funk You Up’. Most interesting tune is the slow and sensual ‘Love Tones’ and listening, I’m thinking that the bass line influenced Omar’s ‘There’s Nothing Like This’, though I don’t know how that could be!