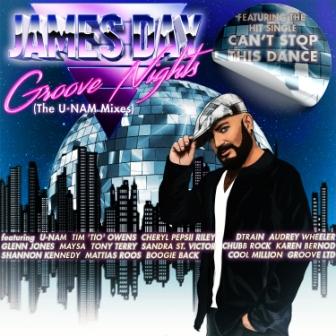 It’s mighty hard to properly describe JAMES DAY. Modern soulsters will know that over the years his name’s been on plenty of magnificent modern soul music… but he doesn’t actually perform … well, not much. As a young man he harboured ambitions to be a singer but a serious bout of the debilitating disease Meniers Syndrome resulted in severe bouts of dizziness and loss of hearing in one ear. Sadly that ended James’ singing aspirations; however, strong and undaunted, he decided to write and produce the soul he loved and acting as a facilitator/co-ordinator he’s gone on to create some of the most satisfying modern soul of recent years and to help him deliver he’s used some of the biggest names in the business.

His latest project is probably one of his most ambitious. Fans of James Day will know that he knows a good song when he hears/writes one and so he likes to recycle his very best; so on ‘Groove Nights’, (for that is the title of his new album), Mr D has joined up with guitar maestro U-Nam to reimagine some of his very best tunes and we kid you not… the little album (just nine tracks) will be amongst 2018’s very best modern soul outings.

Day aficionados will recognize many of the tunes – stuff like ‘Who Can Tell The Heart’, ‘Can’t Stop The Dance’ and ‘We Dance’ but with U-Nam adding his Benson-esque licks you’ll rediscover them anew. There are, I think, two new songs – ‘He’s A Hurricane’ (which comes in two mixes) and the Chic influenced ‘Dui’ (Dancing under the influence) with Audrey Wheeler on lead vocals. Other featured artists include Cheryl Pepsii Riley, Maysa, Glenn Jones, Tony Terry, Sandra St. Victor, Tim Owens, Karen Bernod and D-Train. Mr Williams wraps his mighty larynx around the smouldering ‘Outa Da Funk’ which proves that James Day can “do” whatever soul genre he chooses.

The album’s first “official” single is the Boogie Back mix of ‘He’s A Hurricane’ – ab fab, but do yourself a real favour and check out the whole album!