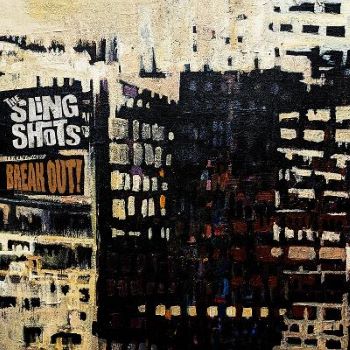 THE SLINGSHOTS are a 7 piece Funk and Soul band from Barcelona and have been entertaining fellow Catalans since 2008. Research reveals that the band have released 2 LP’s, 5 singles and have been championed  by Craig Charles. Hardly surprising, their music is rough, tough and organic – just the ticket for the ex-Corrie cabby!

During the pandemic, the band recorded plenty of music and four of the cuts they worked on have just been released on an EP called ‘Break Out’.

The mini album opens with a frantic instrumental, ‘Chasing Marcus’ . It’s all over the place- and meant to be. The band say that the tune is their version of police car chase. ‘Got My Own Time’ sounds a little more organized. It’s a solid strutting groove with a soulful vocal in tribute (we’re told to Sam Cooke). ‘Just A Classic Guy’ is the most immediate tune on the set. Brash and brassy with a Northern soul undertow and 60s Detroit vibe, it never lets up! The EP ends up with a psychedelic and bluesy ‘Me I’m Fine’ .

All four tunes on the ‘Break Out’ EP are band originals and it’s out now with a second pandemic recorded set to follow soon.