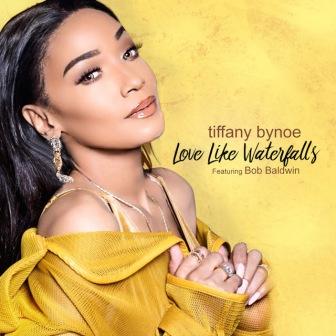 TIFFANY BYNOE is a US soulstress who’s part of that very special breed who’ve won the famed Amateur Night three times at Harlem’s Apollo Theatre. A deluge of deals followed but her mother insisted she finished school, whereupon she signed with Electra where she recorded as Tene Williams and the single ‘Give Him A Love He Can Feel’ hit the Billboard Hot 100.

After marrying gospel singer Kyle Bynoe, Tiffany retired from the business to raise a family in her hometown – Akron, Ohio. The Bynoes worked together in the Christian ministry and Tiffany also started to work the gospel music circuit. En route she founded the non profit organization called Gabby’s Heart, which advocates for families dealing with children’s heart conditions like her own daughter’s. She also returned to the studio to make new music which, though not specifically Gospel, carried positive messages…. this year she’s been busy promoting her latest endeavour, the ‘Tiffany’ EP.

The mini album’s USP is the song ‘All Things New’ which is a duet with her uncle a certain Howard Hewett. There’s a touch of ‘You Make Me Feel Brand New’ about this one and good to hear Hewett on a new recording. Of note too is Tiffany’s cover of Deniece Williams’ ‘Free’. Bob Baldwin is on hand too offering production advice and playing his usual slick keys on the lead single, the slinky, atmospheric ‘Love Like Waterfalls’.