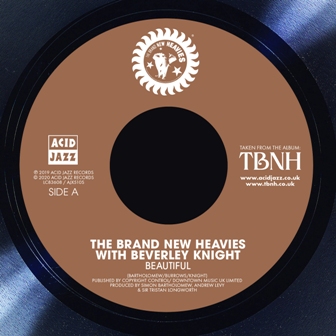 Hard to believe that the BRAND NEW HEAVIES have been doing it for 30 years! To celebrate Acid jazz Records have just released some special BNH material. First up there’s a 7″ single that pairs two of the best cuts from the band’s 2019 album…. ‘Getaway’ fronted by N’Dea Davenport and ‘Beautiful’ with vocals from Beverly Knight.

Then there’s a “digital EP”… three never before released tracks from the band showing their funkier side. Indeed the lead cut is called ‘The Funk’, even funkier is ‘The Beak’ while the third tune, ‘Candy Tow’ is perhaps the most intriguing. More intricate, there’s a jazzy undertow, some crazy sax and tinkling vibes. Not sure of the music’s provenance but a must for band fans… new mixes on the way too! All out now!