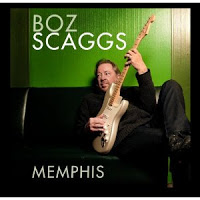 After quite a time everyone’s favourite blue-eyed soulster, BOZ SCAGGS, is set to release a brand new album. He’s just putting the finishing touches to a new studio recording called ‘Memphis’ and it’s penned in for a March release on 429 Records via Fontana.

The LP’s title reveals all. Yes…. it was recorded in Memphis – at WILLIE MITCHELL’S Royal Studios to be exact. The album features sidemen WILLIE WEEKS (bass), RAY PARKER JR. (guitars), SPOONER OLDHAM (keyboards), THE MEMPHIS HORNS, LESTER SNELL (string arrangements) and producer STEVE JORDAN (drums) and amongst the tracks are covers of ‘A Rainy Night In Georgia’ and ‘Can I Change My Mind’…. Full review here @ SJF very soon.