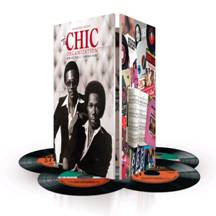 For all kinds of reasons NILE RODGERS is currently enjoying a high media profile. He’s worked on the new, acclaimed DAFT PUNK long player and has a raft of live shows and festivals lined up (see our recent news story). Now Rhino records are set to give an official UK release to an in-demand CHIC box set.

Entitled ‘Savoir Faire’, the 4 CD collection comes in a long digi-pack which contains a 20 page booklet with notes from RODGERS himself. More, the set contains a wealth of rare and unreleased tracks along with 5 songs remixed by French disco meister DIMITRI FROM PARIS.