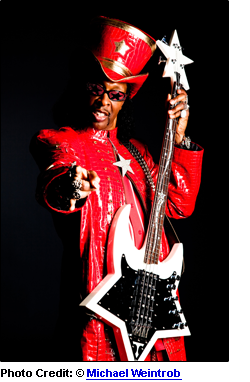 Mascot Records have announced that the incomparable BOOTSY COLLINS will be releasing a brand new studio album at the end of April. With typical understatement, Mr COLLINS claims that ‘Tha Funk Capital Of The World is “the best thing I’ve ever done“. We will, of course, have to wait and see – or more specifically, listen, but what we do know for sure is that the album features a whole host of guest artists and “celebrities” including scholar DR. CORNELL WEST, activist REV. AL SHARPTON, the actor SAMUEL L. JACKSON, rappers ICE CUBE, SNOOP DOGG and CHUCK D, one time P-FUNKERS – GEORGE CLINTON and BERNIE WORRELL, percussionist SHEILA E, soul legend BOBBY WOMACK and guitarists BUCKETHEAD and CATFISH COLLINS. CATFISH – BOOTSY’S brother sadly passed away during the making of the album.