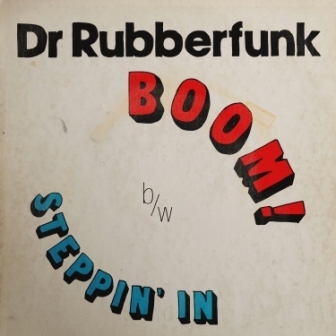 DR RUBBERFUNK is the musical alter ego of Simon Ward. Ward began DJing in his Dr Rubberfunk guise way back 1992, releasing his debut 12″ in 2001. He has since produced 3 artist albums; ‘The First Cut’, ‘My Life At 33’ & ‘Hot Stone’ and has also remixed and produced numerous artists.

Right now he’s working on a series of 7″ singles under the collective title. ‘My Life At 45’. All limited editions; the latest is ‘Boom’ which features the vocals of John Turrell. The song is a funky tale of man who has burned the candle at both ends, leaving him with just his recriminations! Familiar story? The record’s B side is ‘Steppin” – a lazy but tight jazz-funk groove with Hammond/guitar/ piano interplay.

If you missed any of the good doctor’s other 45, the label – Jalapeno Records, tell us that they’re all going to be collected together for a February album.