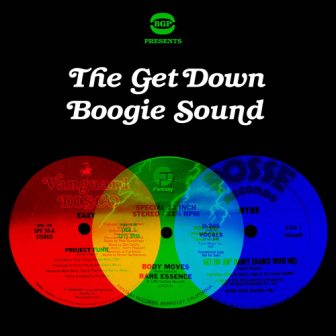 Ace/BGP’s latest compilation takes a look at the funk and jazz inflected dance music that was popular in American underground dance clubs in the 80s. The album’s called ‘The Get Down Boogie Sound’ and the thirteen tracker’s been put together by veteran dance music DJ, Julian Jonah who was there right at the beginning of the house era and therefore savvy enough to know that that music evolved from earlier underground dance scenes. He also acknowledges the fact that as disco started to wane and big studio orchestras were out of most producers’ budgets, people turned to the sparser sounds of funk and raw jazz for their dance inspiration and even started to include raps and chanting.

Expect lots of tough tunes here. Many are hard to find. Amongst them ‘Get Up And Dance (Dance With Me’) from Mynk – the band, in effect, a splinter from the great Fatback Band and with Bill Curtis in control you probably know what to expect. Lightest of the offerings is the lovely jazzy ‘Pastel’ from Marlon McClain, one time front man in Pleasure.

All the tracks come in full length edits. Interestingly the shortest cut comes in at just three and half minutes. It’s ‘Body Moves’ from Rare Essence. Essentially it’s a repetitive chant – yet it took 13 people to write!

THE GET DOWN BOOGIE SOUND is out now on BGP