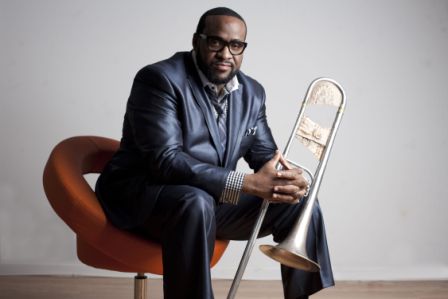 Trombonist, NORMAN “JEFF” BRADSHAW debuted in 2003 with the acclaimed album ‘Bone Deep’. Personal problems (marriage and subsequent divorce) along with constant demands on his time as a session player have meant that the much anticipated sophomore set has been delayed until now.

Amongst the tracks on the album is JEFF’S re-tooling of the JANET JACKSON hit, ‘Got ‘Til It’s Gone,’ featuring MARSHA AMBROSIUS and rapper TWYZE. BRADSHAW explains, “I was always a fan of the JANET song, and I wanted to record it because it spoke to what was happening down there in New Orleans. I wanted to remind everyone that there is still work to be done in New Orleans. People think some years have gone by since KATRINA and everything is cool. But, ‘no, things are not cool!’ They are a long way from being back to normal.” To that end, the launch of ‘Bone Appétit’ coincides with the launch of an awareness campaign for The New Orleans Musician’s Relief Fund www.NOMRF.org a grassroots organization which provides musical instruments and financial grants to musicians in need and sustains the musical heritage of New Orleans by furnishing instruments to school children who show promise.