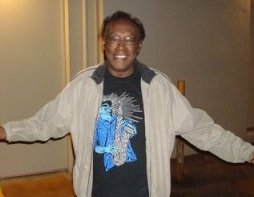 Reports from US news agencies reveal that 2013 has taken another soul hero – BOBBY (BOBBIE) SMITH … co-lead singer with THE SPINNERS. No details have been given – other than that BOBBY died on Saturday March 16th … he was 76.

Born in 1936 in Detroit, ROBERT SMITH (he used both BOBBY and BOBBIE in his bios) formed his first group with close school friends. That group (SMITH, BILLY HENDERSON, PERVIS JACKSON, HENRY FAMBROUGH and CP SPENCER) eventually became THE SPINNERS who debuted in 1961 with the doo-wop throw-back ‘That’s What Girls Are Made For’ … a song on which SMITH took lead.

Eventually signed to Motown, they remained second stringers at the Gordy empire despite some strong releases – including the ever-wonderful ‘Sweet Thing’ – covered in the UK by GEORGIE FAME.

THE SPINNERS’ biggest Motown hit was the STEVIE WONDER-penned ‘It’s A Shame’ (with G C CAMERON on lead vocals) but by the time that one broke the group were ready for pastures new. They found that newness at Atlantic and there, paired with uber-prodcer THOM BELL, they recorded smash after smash (notably ‘I’ll Be Around,’ ‘Ghetto Child’, ‘Could It Be I’m Falling In Love’ and ‘Games People Play.’ On all their big Atlantic hits SMITH shared lead vocal chores with the charismatic new lead PHILIPPE WYNNE.

In 1979, working with producer MICHAEL ZAGER, the SPINNERS hitched themselves to the disco band wagon and scored with cuts like their remake of THE FOUR SEASONS’ ‘Working My Way Back To You’ and SAM COOKE’S ‘Cupid’ .

THE SPINNERS continued recording into the 90s but success was hard to come by. They eventually became fixtures on the oldies circuit. Illness and death took its toll. JOHN EDWARDS (WYNNE’S 1977 replacement) suffered a serious stroke in 2002. HENDERSON died in 2007 and JACKSON in 2008, leaving SMITH and HENRY FAMBROUGH as the only “originals”. FAMBROUGH is now the only remaining original member.