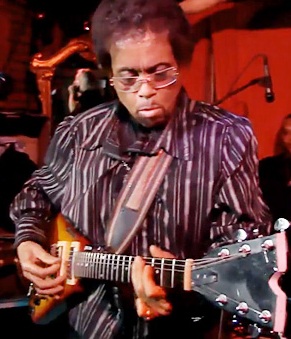 Born in Lafayette, Louisiana, Parker will be remembered for his monumental song, ‘Watch Your Step’. Released back in 1961 on the V-Tone label, the riff-heavy song became a staple cover for any 60s beat group worth its salt. The Beatles even played it a couple of times in their Cavern/Hamburg days and in an interview just before he died John Lennon acknowledged that it was in the Fabs collective consciousness when they penned things like ‘Daytripper’ and ‘I Feel Fine’. Carlos Santana also admitted to being influenced by Bobby Parker’s in-your-face guitar styling: “Bobby inspired me to play guitar – he’s one of the few remaining guitarists who can pierce your heart and soothe your soul.”

In a long career Parker worked with many blues and soul greats…. people like Bo Diddley, Sam Cooke, Chuck Berry and Little Richard and for a time in the 70s he worked with Jimmy Page. Ever in-demand, Parker became a mainstay at international blues festivals and was working right up to his death.

Bassist Anthony B Rucker – long time Parker collaborator – confirmed the guitarist’s death in a weekend web post: “It is with a heavy heart I thank you, Bobby, for all that you have done for me. I’m so glad I had one last chance to play with you a couple of weeks ago. See ya on the other side