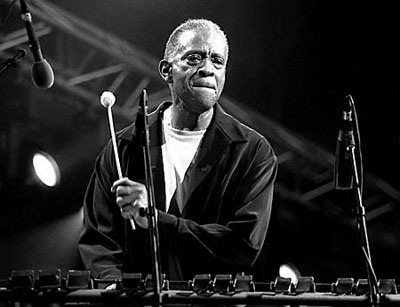 Celebrated jazz vibraphonist and marimba player, BOBBY HUTCHERSON died on Monday, 15th August. He died at his home in Montara, California. Aged 75, Bobby had long been treated for emphysema.

Born in Los Angeles in 1941, Bobby’s first instrument was the piano. However after hearing Milt Jackson he was hooked on the vibraphone. His career took off in the early 60s and he went on to release over 40 albums. Many, like ‘Out To Lunch’ (a collaboration with Eric Dolphy) and ‘Mode for Joe’ (on which he worked with Joe Henderson), are regarded by critics and fans alike as jazz classics.

Between 1963 and 1977 Hutcherson was pacted to the iconic Blue Note label and he helped define that famous label’s image and reputation. His early work was recorded in New York but after a marijuana bust 1967 (which made it hard for him to find work in the New York clubs) he relocated to his home state.

In the early ’70s Mr. Hutcherson bought land on the California coast in Montara, where he built a house. He lived there with his wife, the former Rosemary Zuniga who along with sons Teddy and Barry survive him.

After Blue Note, Hutcherson worked for (amongst others) Columbia, and Landmark. From 2004 to 2007, he toured with the first edition of the SFJazz Collective and in 2010 Bobby was named a National Endowment for the Arts Jazz Master.

In 2014 Bobby Hutcherson resigned to a reinvigorated Blue Note where he collaborated with alto saxophonist David Sanborn on ‘Enjoy The View’.

Over a long career Bobby Hutcherson’s most famous composition was probably ‘Little B’s Poem’ (a homage to his son Barry) which was covered by several artists, including Dee Dee Bridgewater.