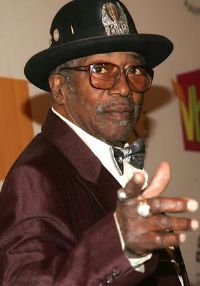 BO DIDDLEY, one of the key figures in the development of modern popular music, died on June 2nd, aged 79. His work at Chess Records was widely copied and the rhythms he evolved became one of the foundations of rock and pop. Sadly, despite that huge importance, Diddley spent much of his career struggling to get people to acknowledge what he’d achieved. Indeed though he latterly won numerous awards and inductions into various music foundations he was candidly honest, “Those awards didn’t put no figures in my cheque book. It just told people they thought enough of Bo Diddley for me to be honoured by putting my name on something, which was really great. But it didn’t put no bucks in my kitty.”

Born OTHA ELLAS BATES in McComb, Mississippi in 1928, the infant was adopted by his mother’s cousin GUSSIE MCDANIEL, and it was with that new surname that he grew up in Chicago. He first chose boxing as a way out of ghetto poverty and as a pugilist he earned the nickname “Bo Diddley”. But the ‘nothing’ which that nickname indicates suggests that his boxing skills were limited. He liked the name though, and when he turned to music that became his moniker.

In 1955 he signed to the Chess subsidiary, Checker and his first single, the eponymous ‘Bo Diddley’ was an instant hit. On it he launched his uniquely distinctive style – grinding guitar, raw vocals, and an infectious bump ‘n maraca rhythm driven by his sidekicks – JEROME GREEN (his cousin) and the DUCHESS (his sister). The hits continued through the fifties and into the early sixties and his sound was soon espoused by British beat groups like THE ROLLING STONES, THE YARDBIRDS and THE ANIMALS – who actually recorded a tribute to the man.

In the mid sixties BO’s hits dried up but he continued to tour and he was always held in awe by British blues fans. In 1973 he recorded in London and he opened for the CLASH on their 1979 US tour. Ten years later he performed at GEORGE BUSH’S Presidential inauguration and even made ads for Nike shoes. DIDDLEY always claimed that he made little money from his music and in 1994 a Los Angles judge awarded him $400,000 from the estate of his dead manager.

In May 2007, DIDDLEY suffered a stroke after playing a gig in Council Bluffs, Iowa, but within a month had recovered sufficiently to be discharged from a hospital near his home in Archer, Florida, where he lived with his fourth wife, SYLVIA PAIZ. Further heart attacks debilitated him and he died on June 2nd. MICK JAGGER was one of the first to offer tributes … “We will never see his like again”… too true.