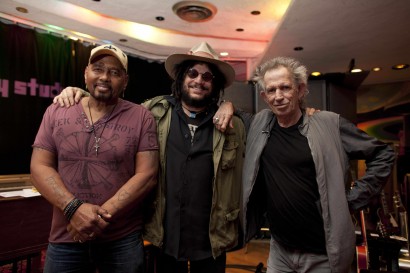 Seraphic-voiced New Orleans soul man AARON NEVILLE debuts for the iconic label with ‘My True Story,’ a twelve-track album produced by Don Was and Rolling Stones’ guitarist Keith Richards (pictured with Neville – photo by Sarah A Friedman). The album’s material is drawn from some of Neville’s favourite tunes from the doo-wop era and also includes distinctive new versions of The Drifters’ ‘Money Honey’ and ‘Ruby Baby’ plus a fresh take on The Impressions Curtis Mayfield-penned ‘Gypsy Woman.’ The album’s released on January 21st.

Jazz singer, JOSÉ JAMES, also makes his Blue Note debut with his third long player, ‘No Beginning No End,’ which is in the shops on January 22nd. His collaborators on a set that melds jazz with R&B and hip-hop include noted jazz keyboardist Robert Glasper, bassist/producer Pino Palladino, R&B singer/songwriter Emily King and pianist Kris Bowers.

Legendary saxophonist/composer, WAYNE SHORTER, recorded for Blue Note in the 1960s when he was a member of Miles Davis’s pathfinding quintet. Now, he’s back with the label after a forty-three hiatus and returns with a live album, ‘Without a Net,’ on February 5th. It features some new compositions as well as old favourites and showcases his quartet, which comprises pianist Danilo Perez, bassist John Patitucci, and drummer, Brian Blade.