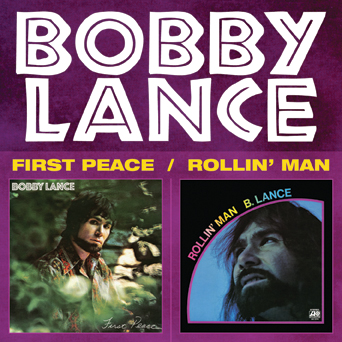 First up there’s a “twofer” from the relatively unknown BOBBY LANCE. Born in Brooklyn, Lance was orphaned at an early age and brought up by his sister, Fran, with whom, in later adolescence, he forged a song writing partnership. They penned songs for people like Maxine Brown and Goldie and the Gingerbreads but their biggest success was with ‘The House That Jack Built’ – a hit for Aretha Franklin who’d covered Thelma Jones’ original. More songs were placed with big names – Arthur Conley and Lulu amongst them – and on the strength of that, Atlantic Records offered Bobby a contract as a performer – a role he’d long hankered after.

At Atlantic he cut two albums – ‘First Peace’ and ‘Rollin’ Man’ but for all kinds of complicated reasons (Lance was also contracted to Motown!) Atlantic failed to promote either of them and they sunk without trace. Lance was dropped by Atlantic and ended up playing around the New York club scene. Eventually disillusionment set in and he went to college and picked up teaching qualifications and now teaches literacy through music.

Now, thanks to the archivists at Real Gone, those two Atlantic long players – ‘First Peace’ and ‘Rollin’ Man’ – resurface on this collectors’ “twofer”. Released on the Cotillion imprint, ‘First Peace’ offers most for the soul crowd. Recorded in Muscle Shoals, it features that studio’s rhythm section, King Curtis leads the horn section while the Sweet Inspirations provide BVs. In places it strays into Delaney and Bonnie territory but there are some superb ballads with the best being the wonderful ‘Somewhere In Between’. Featuring some delicate piano, I can’t help thinking it would have made a great vehicle for Aretha! Recorded in New York and credited to “B Lance”, ‘Rollin Man’ is a much rockier affair though again a couple of the ballads are worth checking.

The second, new Real Gone retrospective features a much more familiar name – TONY JOE WHITE, the man for whom the genre “swamp rock” was created. Best–known for ‘Polk Salad Annie’ and ‘Rainy Night In Georgia’, this 2CD, 40 track collection gathers together all the tracks the Louisiana singer/songwriter recorded for Warner Bros after his tenure with Monument.

Essentially you get three LPs worth of music – the eponymous label debut from 1971, ’72’s ‘The Train I’m On’ and ‘Homemade Ice Cream’ from 1973. In the main the music is as you’d expect… gutsy, down-home, blues based country rock with lyrics detailing life and loving in the rural Louisiana. The ballads have travelled better and though there’s no ‘Rainy Night In Georgia’, songs like ‘Take Time To Love’ are worth checking by those romantically inclined.

The sound on ‘Homemade Ice Cream’ is a touch lighter – almost straying towards West Coast rock but the man’s laconic voice makes sure it all remains “down home”.