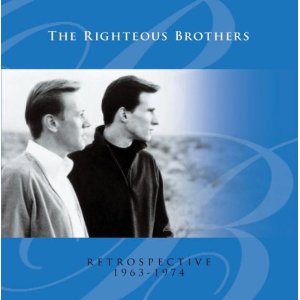 Lots of great blue-eyed soul reissues around at the moment… first up is a new, re-mastered 20 track collection on the genre definers – THE RIGHTEOUS BROTHERS. ‘Retrospective 1963 – 1974’ offers the very, very best of everything that BILL MEDLEY and BOBBY HATFIELD created together. The set kicks off with the fabulous ‘Unchained Melody’ and ends with 1974’s ‘Rock And Roll Heaven’… a track that sadly lists deceased rock and soul singers. Sounds tacky… but it works and it gave the duo their last hit. In between there’s everything you’d ever need on the BROTHERS. The PHIL SPECTOR-helmed ‘You’ve Lost That Loving’ Feelin” will still create shivers, but then so too will other SPECTOR masterpieces like ‘Hung On You’, ‘Just Once In My Life’ and ‘Ebb Tide’. Other great moments include the GOFFIN-KING gem ‘On This Side Of Goodbye’ and ‘(You’re My) Soul And Inspiration’… and to prove the duo could rock too, there’s ‘My Babe’ and ‘Little Latin Lupe Lu’ – both staples of most decent 60s UK beat groups’ repertoire. Fabulous stuff… and offered here for the first time in remastered format using the new Direct Stream Digital technique. Label, by the way, is ABKCO via Universal.

Next up there’s a three LP on two CD set from JAY AND THE AMERICANS. The group have always had a strong following from the soul contingent and by the time these three albums – ‘Sands Of Time’ (1969), ‘Wax Museum’ (1970) and ‘Capture The Moment’ (1970) – were released the lead vocalist was the one-time DAVID BLATT who’d morphed in to ‘JAY BLACK’. On the first two of the above listed LPs the group offer their own spirited versions of soul and rock classics like ‘This Magic Moment’, ‘Gypsy Woman’, ‘So Much In Love’, ‘Message To Martha’, ‘Let It Be Me’ and ‘Some Kind Of Wonderful’ .

The third LP in the set, ‘Capture The Moment’, contains original material from a variety of sources and collectors will be interested to note that the album contains four songs which are arranged by WALTER BECKER and DONALD FAGEN. The soon-to-be STEELY DAN duo was part of JAY AND THE AMERICANS’ road band and on stuff like ‘She’ll Be Young Forever’ you can hear them cutting their studio teeth.

Another set worth checking is ‘Star Spangled Springer’ from PHIL EVERLY. This was his first album without brother DON and is essentially a pop/country collection. Yet it boasts two wonderful songs that have gone on to be covered by a number of soul artists. First there’s the original version of ‘The Air That I Breathe’ and then there’s the saddest paean to introspection and loneliness that you’re ever likely to hear – ‘Snowflake Bombardier’. That one song alone is worth the entrance ticket. Find out more about this set (and JAY AND THE AMERICANS too) @ www.bgo-records.com