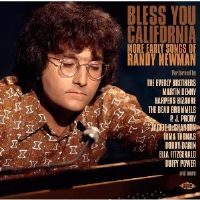 The latest release in Ace’s quite excellent songwriter’s series is a second volume dedicated to the early work on RANDY NEWMAN. The 26 featured songs were all composed by RANDY prior to his breakthrough as a performer in the 1970s and though it’s not a soul set per se, it does contain some blistering soul cuts – some which till now have been hard to find. Topping the list is IRMA THOMAS’ 1964 Imperial recording of ‘Anyone Who Knows What Love Is (Will Understand)’. The rerecording was always cited by DAVE GODIN as a defining example of “deep soul” and the years since DAVE’S passing haven’t altered that fact. Elsewhere, there’s LOU RAWLS’ ‘Let’s Burn Down The Cornfield’ and ELLA FITZGERALD’S ‘I Wonder Why’ along with blue-eyed soul from DUFY POWERS and ERIC BURDON. There’s also plenty of classic pop from people like JACKIE DeSHANNON, LINDA RONSTADT, THE BOX TOPS, THE DOOBIE BROTHERS, THE EVERLY BROTHERS and CLAUDINE LONGET. Like all the albums in the series, ‘Bless You California – The Early Songs of Randy Newman’ is essential for serious collectors across all genres.