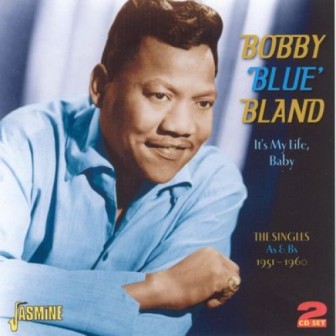 I know quite a few soul collectors who are using the lockdown to re-assess and update their collections… filling in gaps where they know they ought to have more music on a particular artist or group. Here @ SJF we’ve taken the opportunity not only to re-design the site but also look at some artists who we think are maybe a little neglected. One such artist is the wonderful BOBBY BLAND who sadly passed in 2013. Checking what’s available on him, we came across two wonderful archive collections from Jasmine Records – one a retrospective  of his singles between 1951 and 1960; the other a pairing of his first two Duke albums.

BOBBY ‘BLUE’ BLAND, IT’S MY LIFE BABY is a 2CD, 46 track retrospective which brings together all his single releases up to 1960. It begins with a clutch of cuts that were released on Chess and Modern before offering a wealth of classic Duke releases. Duke, you’ll know, was originally a Memphis label that was, in 1952, taken over by Houston label Peacock. With the Peacock/Duke owner Don Robey (aka Deadric Malone) and trumpeter/producer Joe Scott, Bland crafted some remarkable music that was one of the cornerstones of the real soul genre. While Sam Cooke brought gospel elements to soul and Ray Charles brought jazz sensitivities, Bobby Bland brought blues shadings  and on the album you can hear the that evolution starting with the authentically bluesy sounds of 1951’s ‘Love You Till The Day I Die’ to the more sophisticated feel of 1960’s ‘I Pity The Fool’.

Hear Bland’s  bluesy/soul sound crystallise on the ‘THAT’S THE WAY LOVE IS’, the Jasmine CD that pairs his first two Duke albums – 1961’s ‘Two Steps From The Blues’ and ‘Here’s The Man’ from the following  year. Both albums are stuffed with tracks that became the core of the singer’s single releases through the early 60s – songs like ‘Little Boy Blue’, ‘Who Will The Next Fool Be’, ‘St James Infirmary’ and the incomparable, haunting ‘Cry, Cry, Cry’. The two LPs became mod collectors’ items, and rightly so.

I was first introduced to Bobby Bland in 1964 in a smoky Liverpool cellar club (The Sink) when a scruffy Scouse band (The Roadrunners) launched into ‘Cry, Cry, Cry’. I was mesmerised… more, when I managed to source the Bland record (from the famed Brian Epstein NEMS shop) and have been a fan ever since. More famous fans include Van Morrison and Mick Hucknall and there are thousands in between. All will relish these two wonderful collections… both available now!