BLAME IT ON THE BOSSA NOVA … 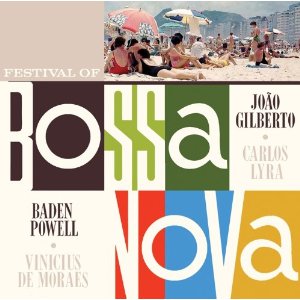 El Records (a division of Cherry Red) have just released a 32 track compilation of classic Brazilian bossa nova music. The story of this simple yet sophisticated “new trend” in music begins in the late fifties and coincides with a period of democratic freedom and economic development in Brazil. A new president, JUSCELINO KUBICHK, was determined to modernize his country and promised his people “fifty years of progress in five”. At the same time work began on a new federal capital, Brasilia, there was renewed foreign investment in the country, the arts began to flourish … and the country’s football team (featuring a teenage PELE) won the World Cup for the first time.

In this heady, encouraging climate, musicians thrived – developing a new, futuristic music that captured the mood of what was perceived in Brazil as a Golden Age. Songwriter ANTONIO CARLOS JOBIM, poet VINICIUS de MORAES and guitarist JOAO GILBERTO were the principle architects of the new music which was soon to be embraced world-wide

FESTIVAL OF BOSSA NOVA is out now on El RECORDS