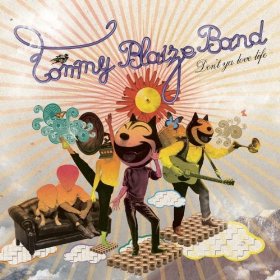 Their label calls them “the most famous UK group you never knew you knew”. Confused? Well, THE TOMMY BLAIZE BAND may not be household “names” but their voices and playing have, I’ll wager, been heard frequently in almost every UK household. You see THE TOMMY BLAIZE BAND are essentially the core of the musicians who play regularly on BBC TV’s ‘Strictly Come Dancing’!

Lead singer is TOMMY BLAIZE. Apart from being the lead male vocalist on ‘Strictly’, he’s also worked with STEVIE WONDER, AMY WINEHOUSE and others. DAVID ARCH is the keyboardist, PAUL DUNNE and ANDY CAINE play guitar while TREVOR BARRY (bass) and IAN THOMAS (drums) are in the group’s engine room. Together, they’ve just released their debut album – ‘Don’t Ya Love Life’.

TOMMY and his gang have spent 18 months putting the album together and working with hot producer, STEVE PRICE, they’ve crafted as set stuffed with catchy pop/soul. The sixsome are augmented by a full string and brass section and some stellar backing vocalists, including the ever-wonderful MADELINE BELL.

Twelve of the fourteen tracks are original songs – penned by BLAIZE with various collaborators. The two covers are memorable versions of ‘My Girl’ and ‘I Wish You Love’. ‘My Girl’ is particularly beautiful – a stripped down piano-accompanied version of SMOKEY’S classic with a touch of string sweetening.