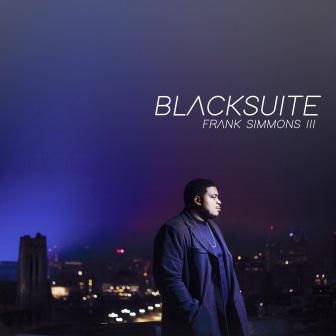 Fans of the “concept album” will be glad to know that the “concept” is still alive and really rather well. Earlier this year we enjoyed the saga of star crossed lovers in Sir Wick’s ‘A Tale Of Two Fools’ and hot on the heels of those fools comes another “connected” set, ‘Blacksuite’ from FRANK SIMMONS III.

Detroiter, Frank or “Frankie” started his musical odyssey at a tender age playing piano and organ in church. Then he studied Music Theory at Marygrove College before venturing out into Detroit’s vibrant music scene. He worked with, amongst others, jazz trumpeter Lin Rountree and eventually formed Late Nights Early Mornings band (LNEM). That band were soul based; then in 2015 he released his own album ‘The Chocolate Noise Affect’ that fused the soul and R&B he’d been playing with his jazz roots.

Frank’s new ‘Backsuite’ album follows the same sonic template – soul, R&B and jazz and helping him deliver is old sparring partner Lin Rountree and a whole team of singers. Most noted is possibly Conya Doss. She fronts the dreamy, neo-soul ballad ‘Language Of Love’ And therein lies the clue to the album’s theme. ‘Blacksuite’ is a 15 track paean to love….. not just sensual, romantic love but love and respect for each other irrespective of creed, colour, belief or inclinations.

Sonically the music reflects the theme. There’s nothing here that’s frantic or upbeat; the format is decidedly Quiet Storm with just a hint of blaxploitation balladeering. In places there are spoken word pieces like ‘Say Love’ which features Cyrus Aaron and there is occasional low key rapping, best exemplified on the cut, ‘Tracey’s Lullaby’ which is a throwback to those great Guru solo albums.