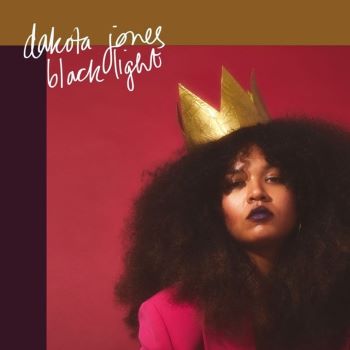 DAKOTA JONES are a new(ish) funk, soul, blues and rock band from Brooklyn. They are Tristan Carter-Jones (vocals), Scott Kramp (bass) Steve Ross (drums), and Randy Jacobs (guitar) – former member of Was(Not Was) who has recorded for Seal, Bonnie Raitt, Tears for Fears, Elton John and many others. Ms Carter-Jones’ middle name is Dakota, making sense of the band name.

In June they turned heads with the single, ‘I Did It To Myself’- a funky-bluesy cocktail which was issued as a taster for an album, ‘Black Light ‘which has just been released and the eleven tracker offers plenty more of that funky-bluesy sound with some tracks being a tad bluesier, others a little more funky while some stray into rock territory. What gives the album its unity is the big, take-no-prisoners vocal of  Ms Carter-Jones and the provocative, questioning lyrics. She says: “I’m a black, queer woman expressing myself through love and music. Some folks still find that to be a transgressive act in and of itself. I work to fight that idea. I write a lot about my sexuality and the ways in which I express it. Songs about sex and love bounce back and forth between songs about heartache, hangovers and self-medication, and the pleasure and pain of truly finding yourself. I don’t think we get to hear these things from a woman’s mouth as often as we should.”

That should tell you that ‘Black Light’ is not always an easy listen but perseverance will bring its own rewards like on the light and gentle title cut, the Daptone flavoured ‘Bad Game’  and the minimalist ‘Medicine’ . In truth I could have done without the rock excess of ‘California’ but I’m sure plenty will connect.

The album has been produced by Grammy-winning John Wooler – who has worked with everyone from John Lee Hooker and John Hammond to Isaac Hayes and Van Morrison while guest musicians include Grammy winning keyboardist Jon Gilutin (Linda Ronstadt, James Taylor, Aretha Franklin, Diana Ross, Jackson Browne) and guitarist Michael Toles (from former Stax Records group The Bar Kays, who’s worked with everyone from Al Green and BB King).