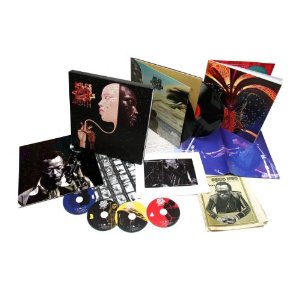 To coincide with the fortieth anniversary of MILES DAVIS’S groundbreaking ‘Bitches Brew’ album – which gave birth to the whole jazz-rock fusion movement – Columbia/Legacy are releasing a special Deluxe Collectors’ Edition (3-CD/1-DVD) box set that includes the original LP mix of the album (which has been unavailable for years) as well as sundry studio outtakes, rare tracks and a previously unissued live performance of Miles and his band from August 1970 in Tanglewood, Massachusetts. There’s also a 70-minute DVD featuring previously unseen colour footage of a concert Miles gave in Copenhagen from November 1969. The set is completed by a 180gram vinyl copy of the original double LP complete with its famous gatefold artwork. In addition to the deluxe version, Columbia is issuing a 2-CD/1-DVD Legacy Edition.

Both formats are released on August 30th.