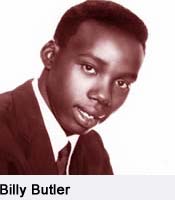 US news agencies are reporting the death of Chicago soul singer BILLY BUTLER. Billy, younger brother of Jerry Butler, was 69 and few details are available other than that he died in the early hours of Wednesday, 1st April in Chicago.

Born in Chicago in 1945, Billy Butler is perhaps best known for his work at Okeh between 1963 and 1966 when he was a mainstay of the then ground breaking Chicago soul scene. Indeed many of Butler’s best recordings were songs written by Curtis Mayfield and arranged by Johnny Pate. Butler, though, was a great writer himself – aged just 18, he’d co-penned the classic ‘I Stand Accused’ with brother, Jerry. His debut release was ‘Found True Love’ but his biggest hit was his cover of the Impressions’ ‘I Can’t Work Any Longer’. In the UK and Europe, though, he’s best known for the up-tempo ‘Right Track’ – an early Northern soul favourite and still played at genre venues.

Many of Butler’s recordings at Okeh were credited to Billy Butler and the Enchanters (sometimes shortened to The Chanters). The group consisted of John Jordan, Errol Batts, and Alton Howell and various members of the group along with Butler also contributed backing vocals to countless Okeh recordings – notably Major Lance’s ‘The Matador’.

In ’67 Billy and the Chanters signed to Brunswick where they worked with Carl Davis. Success however proved elusive despite some quality releases- like ‘Love Grows Bitter’. Billy then founded a new group, Infinity and their debut ‘Get On The Case’ (released on Fountain) floundered because a distribution deal with Stax hit business problems. Infinity then signed to Mercury before moving onto a venture with Jerry Butler (Memphis Records). They then joined Pride but in ’74 Infinity disbanded.

Billy then became Jerry’s MD on the road, playing guitar with “The Ice Man Band”. In 1976 he signed to Curtom where he released ‘Sugar Candy Lady’ … his only fully solo album. Billy then went back to work with Jerry.

Never a major star, and often in the shadows of brother Jerry, Billy Butler was nevertheless a fine ambassador for Chicago soul…. RIP